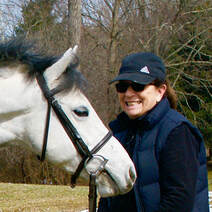 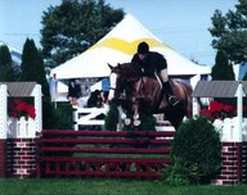 Audra and Splash
Audra is the manager of If Only Farm and Head Coach for the Ithaca College Equestrian team.  She began as assistant coach in 2006 and has lead the 35-strong squad since 2011. Ithaca College riders finished Reserve Champion for the region in 2013 and sent two riders to the IHSA (Intercollegiate Horse Show Association) National Championships the same year.
As an undergraduate at Ithaca College, Audra joined the If Only family in
2002. She competed in the Open division and went on to win the Alumni
Equitation Over Fences division at the IHSA Nationals in Los Angeles.
Growing up in Westchester County, Audra started riding at the age of 7.  She
became a prominent rider on the East Coast showing "A" circuit, winning classes at the Hampton Classic, HITS, Fairfield and Old Salem on her horse, Splashdown (pictured). The Appaloosa / Quarter horse cross came into her life when she was 14, starting a winning athletic partnership and a deep love affair that lasted 13 years.
In 1999, Audra and Splashdown were Champion at the Hampton Classic in the Junior Hunter Division.
Audra is loved by her students for her natural ability to build a calm confidence in both rider and horse. She prides herself in taking every student - from beginners to advanced Hunter, Jumper and Equitation competitors - to the next level.
In 2006, Audra earned her Master's degree in Exercise Physiology from Ithaca College.
​ 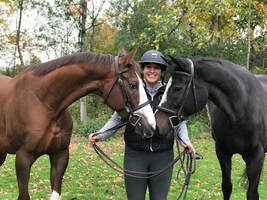 Trick, Liza, and Chevy
Liza joined the If Only family in 2012 as a freshman on the Ithaca College Equestrian team. She competed for 4 years on the team with Audra as her coach. Liza completed her Master’s Degree in Occupational Therapy at Ithaca College in 2017. She currently works as an Occupational Therapist in a nearby school district.
Liza’s passion for horses started at a young age. She began formal riding lessons at age 5. Growing up in New Hampshire, Liza competed on the “A” circuit, mainly in the jumper divisions on the east coast. She travelled to shows including: Vermont Summer Festival, HITS, and Fieldstone.
Liza is a frequent face at the State Fair in Syracuse, many local shows, and the World Equestrian Center in Ohio. She travels to Indiana, Ohio, and Virginia to ride with, and learn from top trainers in the sport. She loves to continue her education to be able to pass on the knowledge and techniques to her students and horses.
Liza is known for her kindness and patience with the young horses. She enjoys retraining off-the-track thoroughbreds for their new careers and starting young horses for their initial careers. A steady, slow start with basic ground manners builds a strong foundation. ​ 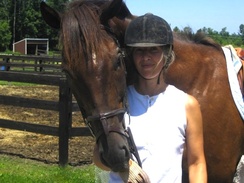 Heidi and Manny
Heidi has been riding for 20 years, and is an If Only Farm native as almost everything she knows she's learned here, though she's also taken several clinics with dressage rider Pam Goodrich. Heidi specializes in dressage, and flat lessons for all disciplines.  As a professional cellist and long-time cello teacher, she is especially interested in the biomechanics of riding, focusing on correct position and relaxation in order to ride efficiently and beautifully.  These same qualities, relaxation and correct position, are necessary to play the cello well and she finds the similarities fascinating and helpful. Body awareness is absolutely key to doing any discipline well and riding has helped her playing, and vice versa.
​ 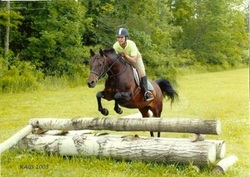 Joan and Brass To Gold
Joan has been riding as long for as she can remember. Her real equestrian eduction began at If Only Farm when she was 40 years old with her daughter, Cathe. With Susan Lowe as her trainer, Cathe placed 3rd in National Pony Equitation Finals in 1987 and went on to qualify for the Medal Maclay, and USET on her hunter, Huntington Bay. Joan was the groom!  Many of Joan's students have gone on to compete successfully in local and regional competitions. She focuses on beginner/intermediate riders and loves to take a child from the beginning of their riding experience, and prepare them for a safe, competitive, and effective horsemanship future. Joan has been teaching for over 25 years.
​ 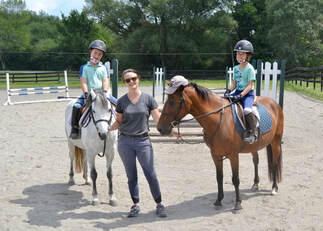 Audrey began riding at 9 years old in Hemingford, Quebec, Canada. Her parents decided to give her “a few” riding lessons for her birthday. 20 some years later, Audrey is still riding and learning. Her parents say, “it was the gift that keeps on giving”. Living on the US/ Canadian border and riding with a German riding instructor meant that Audrey explored the French, American, and German systems of riding. It was here, at Covey Hill Stables, that Audrey learned, regardless of the system - the horse is usually right. Audrey continued her education at Houghton College in their Equestrian Studies program. While Audrey chose to pursue a different degree, Audrey benefits from her course work in Foundations of Equestrian Studies, Eventing 101, Jumping I and II, and Breaking and Training. At Houghton, Audrey learned that the relationship with the horse is the most important “tool”. Post college, Audrey found her way to If Only Farm and has called it home for over 7 years.
Here at If Only Farm, Audrey specializes in introducing kids to the world of horses. Audrey works primarily with our beginner riders on becoming confident and competent equestrians.
Audrey believes: if there is a disagreement - the horse is usually right; what your horse thinks of you is more important than any ribbon; and we all have more to learn.

Since the Spring of 2016 Tracy Durham has offered private and semi-private dressage lessons once a month at If Only Farm.  Tracy has earned Regional and National titles from Training Level to Grand Prix all on self-trained horses and has trained with many top dressage riders. Riders and horses of any discipline can benefit from and will enjoy working with Tracy. More information about Tracy Durham's Clinics.